In this article, we are going to look at the differences between types of boat batteries. We’ll also cover the jargon used, and some of the most common questions we get asked during surveys. Throughout, we will cover:

Flooded lead acid batteries have caps fitted to each cell. These caps can be removed to allow you to check the water levels. They should only be topped up with distilled water, and not tap water. If you allow the water levels to drop significantly, you risk the plates failing, and in some cases, the battery exploding.

Sealed lead acid batteries have a sealed enclosure with no provisions to top up distilled water. They have a one way valve as protection, allowing electrolyte gases to escape in the event that temperatures overheat.

Lead acid batteries consist of plates, separators and electrolytes. The battery uses an electrochemical reaction to convert chemical energy into electrical energy. When the battery is being used and producing current, it is in the “discharging state”. This state depletes the electrolyte over time and is the reason why we have to charge batteries. When charging batteries, this process is reversed.

Unfortunately, one down side of lead acid batteries is they self-discharge. It’s important that you also remember that your bilge pumps and sometimes stereo systems are linked directly to your batteries. This means your electrical system is never 100% off and can cause your batteries to go flat when they’re left unattended for a period of time.

You may often hear the term that certain batteries are “maintenance free”. Although they won’t require distilled water, they shouldn’t be referred to as being maintenance-free as terminal corrosion is the bane of boaties. You should regularly checked the terminals for corrosion and external condition of the batteries for any damage or swelling.

AGM and gel cell batteries do not require water levels to be monitored. Instead, gel batteries have silica added to the electrolyte (basically sulphuric acid) which forms a paste that doesn’t flow when the battery is turned over. This means the battery doesn’t have to be kept upright.  The AGM battery shares the ability to be overturned, but retains the electrolyte in a tightly-woven glass fibre mesh. This is why they are often chosen to be onboard boats as the movement of the boats does not affect the battery and they require little maintenance. The downside is that they’re very expensive!

You may also notice gel cell batteries mounted in sections of the boat that move around or experience a lot of vibration. An example of this is at the bow next to the bow thruster. These types of batteries can better withstand the constant pounding at the bow better than their flooded or sealed lead acid alternatives.

What is the difference between “starting” and “house” batteries?

The difference between starting and house batteries is the internal design, being the thickness and surface area of the plates and connections. House batteries are usually “deep cycle” and better at continuous small loads, as opposed to short burst of large amperage which are typically starting batteries.

Starting batteries work on the basis that they don’t operate often (compared to house batteries) but their current demand is very high when utilised.  The main factor is battery plate wear over the long term and current density (amps per square metre of battery plate). If a battery has a large plate area, the current density will be relatively low, so the current-induced plate erosion will be correspondingly low.  In order to pack in a large plate area without making the battery too big, the plates are made thinner.  In a continuously operating battery (house battery environment) thin plates would have a relatively shorter life, so house batteries go for thicker plates to give satisfactory life.  You often see the same batteries used for all applications, which we would recommend against.

A good design is to have the starting bank as stand-alone bank with nothing else attached to them. This will give you the best chance of being able to leave the boat unattended for a period of time and at a minimum being able to start the engine to get you home.

What does amp hour mean?

Amp hour is the rating at which the battery can last with a constant load of a specific amperage. The larger the “amp hour” the bigger capacity the battery has before it will go flat.

1 amp hour means the batteries charge will last for 1 hour (or thereabouts). There are exceptions to the rule, such as heat affecting the ability to constantly draw current.

As a general rule of thumb, the more “amp hours” you have onboard, the bigger your battery system capacity is. You can figure out the total amp hours by adding up the ratings of each battery fitted. For example,  3 x 70 AH batteries = 210 amp hours in total.

Should all my batteries be the same voltage and amp hour?

Yes, it is very important that all your batteries are rated the same voltage and amp hour if they are in the same bank. If your batteries are being connected in series or parallel, then they need to have the same amp hour rating. You can not connect a 100AH with a 110AH as the smaller battery will discharge at a higher rate. As a result the smaller battery will become depleted and unusable faster. With that being said, it is fine to have separate banks that are not directly connected. For example: 2 x 200AH house bank and 2 x 70 AH start bank or a 12V house bank and 24V start bank.

Why do some boats have 12V and 24V systems onboard?

This has to do with the amount of power required to be delivered by the batteries with the least resistance loses.

Typically you will see 24V connected to larger diesel engines, anchor winches and other items that require larger current draw. You will then have the 12V systems connected to the small load items, such as lights and stereos.

Imagine you have a horse pulling 100kg – the horse is the 12V and the load is the amps required. Add a second horse (24V) and it will be much easier to pull that load and deliver the 100kg faster. On most larger engines and boats, you will typically come across 24V systems.

Also, using the Ohm’s law equation, you can figure out the current required with a 24V system. As a result you can can carry the load in smaller cables saving space and money.  The large cruise ships you see around the harbour run 6.6kVa system for the same reasons.

Should I consider solar or wind power?

Yes, this is a great option for moored boats. We typically see solar panels fitted to boat hardtops and canopies, but it’s not often we see wind generation as it can be hard to control when not onboard and is easily damaged by excessive winds. Solar is a great option especially for boats kept on moorings as they will give a trickle charge to your batteries, even in even low sun conditions.  For example, I have a 20w panel fitted to my single N100 battery, and even after four years its health state is still above 80%.

This being said, make sure you have the correct solar set up onboard your vessel as it is not as simple as connecting a panel to a battery. We advise contacting a marine electrician and come up with the best system for your boat. The wrong set up can do more harm than good, so having a professional onboard is always recommended. All solar systems will need a regulator to avoid overcharging the battery system.

Simple and most useful things you as an owner can do to maintain battery life:

You’re probably wondering… how does this all tie together and what can I do to improve my battery longevity? Here’s my top tips:

Where Do I Find My Boat HIN Number?

Every boat should have a HIN (Hull Identification Number). The HIN is easily identifiable on the hull. Although not everyone knows where to look. As a result, we often have people ask us "where do I find my boat HIN number?" In some cases they can be hard to locate,...
Read More  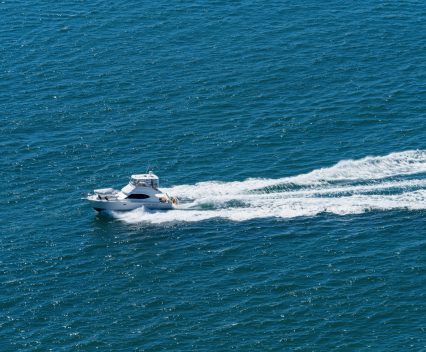 Where Do I Find My Boat Engine Serial Numbers?

Every marine engine has a serial number that should be easily identifiable on the engine. In some cases they can be corroded off or hard to read, or the sticker is missing. With all the different makes and models it can be confusing to know where to look. We’ve started...
Read More 

What are the limits of a Pre-Purchase Marine Survey?

Surveys of all kinds have their limitations. Whether you’re booking a pre-purchase marine survey for insurance purposes only, engine only, or a full pre-purchase inspection, it’s impossible to know absolutely everything within a timely (and therefore cost effective) manner.  You’re probably wondering why I would write about the limitations of...
Read More 